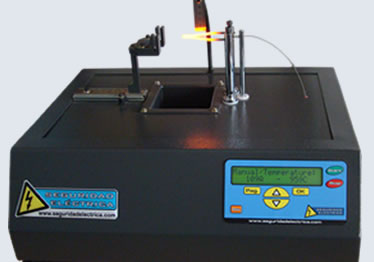 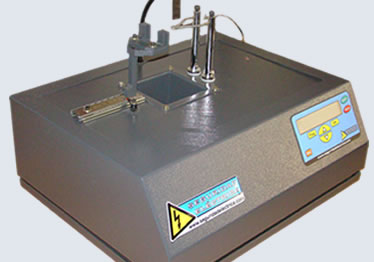 The GLOW WIRE TEST APPARATUS 2009 from Seguridad Electrica is Fully automated test equipment for fire hazard testing as per IEC-60695-2-10, controlled by microcontroller.

The GLOW WIRE TEST APPARATUS from Seguridad Electrica was designed and manufactured to perform the test specified in many standards (IEC 60335, IEC 60065, IEC 60745, IEC 61029, IEC 60950) to check resistance to fire in insulating parts.
Its was designed to meet the requirements of international safety regulatory agencies such as UL, DNV, IMQ, BVSQ, ITS, IRAM, CSA, VDE, DIN, INMETRO.

A loop of resistance wire is electrically heated to a specified temperature and the specimen being tested is brought into contact with this heated wire with a defined horizontal loading.
Observations and measurements are made to evaluate the fire hazard presented by the specimen during exposure to elevated temperatures.
The test described in IEC 60695-2-10.

Our Glow Wire Test Apparatus 2009 is fully automated, controlled by microcontroller.
You only should set:

The equipment also allows manual test in which the operator must manually turn up the heat and, when he reached the temperature desired, press the start button. The sample holder advance to make contact with the filament. After that you can see a timer (contact time) on the display ( 30 seconds or as long as you have set).

Following after this time will be removed automatically restarting a new count of 30 seconds (or as long as you has seteado) for further evaluation (observation time). During this process the equipment will allow maximum penetration of the filament in the sample of 7 mm +/- 0.5mm (you can modify it by changing the time of shutdown feed motor)